You are here: Home › Opinion › Defence Minister Sajjan’s Latest Gap to Fill is the Void Between Principles and Reality 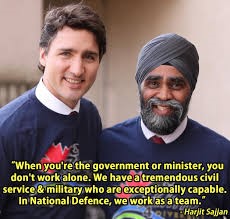 The above picture was part of the Minister’s own photo gallery – a picture speaks a thousand words or maybe even a few thousand more following the Election of Donald Trump.

One that stood out for me was a picture of the Minister handing the Prime Minister a photo of Pierre Elliot Trudeau with his son Justin on a visit to the arctic taken next to a baby seal. The significance was the photo elicited “save the baby seals” comments. This happened well before the building of current day fabricated legends such as “bad-ass,” “feminist” and Prime Minister “Selfie.”

It only goes to reinforce that labels or branding if you wish; such as “warrior,” whether military or social, are poles apart when it comes to the substance and accountability for ACTIONS as PRIME MINISTER and DEFENCE MINISTER respectively today.

Minister Sajjan has taken a lambasting for his proclamations in India about CANADA’S involvement in Afghanistan, in particular his “architectural” role in the Operation Medusa fight against the TALIBAN-A dubious legacy at best.

FIVE YEARS AFTER THE LIBERAL GOVERNMENT LOST THE GENERAL ELECTION IN 2006, THE ERA OF THE LIBERAL “DARK AGES” FOR THE MILITARY AND THE ADSCAM SCANDAL, RE-EQUIPPED CANADIAN TROOPS ENDED THEIR COMBAT ROLE IN 2011 UNDER THE CONSERVATIVE GOVERNMENT OF STEPHEN HARPER.

Sajjan, a Liaison and Intelligence Officer, had the term “winning hearts and minds” ascribed to his work there. That’s a concept that had it origins in the late 1960s well before either the Minister or Prime Minister was born, 1970 and 1971 respectively. The real issue today are the false claims of governance, valour, fame and glory on the backs of others.

The Minister stood “open kimono,” “mea-culpa” with a clear and already scripted absolution from the Prime Minister. The backdrop of course was the “bait” of HIS distinguished record of service and a “switch;” the acceptance of responsibility for a “MISTAKE” and a pledge to Learn from it. Presumably matters of honesty, truthful answers and the reason behind so much fabrication were sought. Parliamentary theatre and trained seal performances were the retort.

Thus far, the Prime Minister has continued to express his full confidence in Canada’s Defence Minister and taken all “honour” and “trust” related questions from the official opposition in the House of Commons, who repeatedly called for his resignation as a matter of principle and evident confliction with the reality of his office.

The Defence Minister of CANADA as proclaimed is not working alone. He is a member of five major cabinet committees. HOWEVER, he wears his own exaggerations and any erosion of respect and leadership, from within his own National Defence TEAM, particularly Canada’s Men and Women in uniform where the reality of honour and sacrifice trump rhetorical, theatrical rationalizations or the puffery of management by committee.

ALL THIS TO SAY THE MINISTER OF DEFENCE HAS STATED THERE IS A “HOLE” WITHIN OUR SOVEREIGN DEFENCE-MILITARY INTENT NEEDS AND REQUIREMENTS THAT CONCERNS; MODERN, OPERATIONAL INTEROPERABILITY WITH OUR ALLIES, AND COMMAND AND CONTROL FOR ALLIED ENGAGEMENTS OR TO LEAD INTERNATIONAL COALITION OR ALLIED OPERATIONS.

The Chair of the Cabinet Committee on Canada-U.S. Relations, the Minister of Transport, a former Navy Officer and Astronaut looked grim while taking notes. No doubt the matter of NAFTA and Trade Relations and defence development and production sharing arrangements are the Government’s most pressing problems, NATO contribution shortfalls aside.

The Chair on the Defence Procurement Committee, the Minister of Natural Resources seemed to have a softwood-lumber problem on his hands. When asked by reporters who was Lead negotiator on the recent U.S Lumber tax imposition on Canadian softwood; he guessed it was Minister Freeland.

The Prime Minister at the recent change of cabinet had instructed Freeland to ensure any future deployment of troops is in Canada’s “National Interest,” that really means criteria including “multilateral commitments” and “government policy objectives.” Meanwhile Minister Sajjan was trying to find a mission that was most EFFECTIVE.

Minister Sajjan said that Canada is under pressure from Washington to increase defence spending. “We are now in the troubling position where status quo spending on defense will not even maintain a status quo of capabilities,” said Sajjan. “it is going to take a significant investment…it is going to be significant because of the hole we now need to come out of.”

Meanwhile, in question period, the Prime Minister laid the blame by rote at the feet of the previous Government, a patently embellished fabrication given the Liberals record of “why a Cadillac when a Chevrolet will do.” Chopping close to $12 billion from DEFENCE BUDGETS since taking office speaks for itself.

The Government will announce its Defence Policy Review at the end of this month when the Prime Minister visits the NATO LEADER’S meeting. The Trump administration is focusing on the many NATO member states who have yet to meet a commitment to spend two percent of GDP.

Sajjan said: “The number that we’ll be announcing is a number that meets the needs of Canada and our support for our allies,” the minister said at a defence industry lunch yesterday.

The Prime Minister is the Chair of the Cabinet Committee on AGENDA, RESULTS, and COMMUNICATIONS. It is very unlikely that he will call for the pelt of Minister Sajjan when he is the “Stalking Horse” for the Government’s reversals on Defence budgets and support for our troops within the balance of Canada’s Global and National Interests. These are the horns of dilemma, the burden the Minister bears.

Canada’s Defence Policy is a baiting question. The Minister, for all the fabrications, credibility gaps, and broken election promises thus far, the Minister will be judged by his actions and deliverables with and within the tremendous CIVIL SERVICE and MILITARY he has cited as exceptionally “politically wise” and capable.

Is it mere coincidence that the Prime Minister will unveil his policy at the NATO leaders conference when the Conservative Party of Canada is holding its leadership convention? Does Political Affiliation really TRUMP all the blame, upstaging, embellishments and “mistakes” over the years affecting the men and women in uniform and the loyal service of so many?  That remains forever a matter of LEADERSHIP and TRUST, MORALE and HONESTY.

OUR NATIONAL DEFENCE is much more than a pantomime of STOLEN GLORY and VALOUR.

Ottawa Sun May 12, 2017- “Canada needs to deliver on a fully-funded defence policy” Tony Battista, CEO conference of Defence Associations and Charles Davies Fellow CDA Institute. Discusses Senate Proposals and the rationale for putting into effect a credible Defence Policy-fully funded for both the short and long term. The Senate calls on the government to work with them and the HOUSE of Commons to build an enduring consensus on Defence Policy.

The first Proposal, a “politically” unpopular one, is to progressively increase defence spending to Canada’s agreed NATO target of 2% of GDP (Gross Domestic Product)

Senate Committee on National Security and Defence proposes cancellation of government’s planned purchase of interim purchase of CF 18 Super Hornet fighter Jets in favour of a complete replacement plan, the acquisition of a second supply ship to support the Canadian Navy, acquire attack helicopters as well as a drone fleet and support the Army to maintain the capabilities acquired for and during the Operation in Afghanistan.

An earlier Senate, April report-The Military Underfunded: “The Walk must match the Talk” calls for fundamental change and in how the Government of Canada manages DEFENCE.

These measures and proposals are a priority for Canada and crucial for the men and women who answer the call to serve.

Ottawa Sun May 11, 2017 – The Canadian Press. “Prime Minister told-Make a Decision on Peacekeeping.”

The UNITED NATIONS asked Canada last year to contribute much needed TRANSPORT HELICOPTERS for its mission in MALI where roadside bombs and other improvised explosives pose significant dangers to peacekeepers.

Defence Minister Harjit Sajjan announced Monday that the long-awaited defence policy — which had been expected this week — would instead be delivered June 7, after Prime Minister Justin Trudeau attends a meeting of other NATO leaders at a summit in Brussels on May 25.-And comes after Sajjan himself and Foreign Affairs Minister Chrystia Freeland hold scheduled talks in Washington this week with the Trump administration, including James Mattis, the U.S. Secretary of Defence.

The coming POLICY REVIEW is expected to detail the country’s defence priorities over the next two decades, the kinds of equipment — and funding — needed.

Minister Sajjan said Monday that the DEFENCE PLAN will be released on June 7, after Minister of Foreign Affairs-Freeland gives a speech on Canada’s “FOREIGN POLICY FOUNDATION”

Kevin Murray-Mourne is a former Trade Commissioner for Space, Aerospace, Defence and Security with the Department of External Affairs and International Trade Canada. He is a Veteran of Her Majesty’s Armed forces. He attended the Canadian Centre for Management Development, the Canadian Foreign Affairs Institute and is a Graduate of the American Management Associations Management Program.

View all posts by Kevin B. Murray →
Kevin Murray-Mourne is a former Trade Commissioner for Space, Aerospace, Defence and Security with the Department of External Affairs and International Trade Canada. He is a Veteran of Her Majesty’s Armed forces. He attended the Canadian Centre for Management Development, the Canadian Foreign Affairs Institute and is a Graduate of the American Management Associations Management Program.