You are here: Home › Entertainment › Watch Your Driving: A Spoken Word Album

Following two years of incubation and development, Watch Your Driving, A Spoken Word Album by V is set for release. Ottawa-based spoken word artist V (Vanessa Rotondo) has accomplished her debut album with the support of the City of Ottawa and Ontario Arts Council. Produced by Andrew Brittain, Watch Your Driving is evidence of the vibrant talent in Ottawa’s spoken word and performance poetry community.  The album release party, set for January 10, 2014 at Pressed Cafe on Gladstone, is a great opportunity to support the local arts and find out what our great city’s arts scene has to offer.

Based in Ottawa, Vanessa Rotondo is a freelance writer, national spoken word artist, youth outreach coordinator, and arts educator. In 2012 she released a poetry anthology entitled Since February. Vanessa believes in the power of social change through art. This commitment is reflected in her work with aspiring young writers in schools and communities across Canada and in East Africa.

To mark the release of V’s debut album, Pressed Cafe is hosting an evening dedicated to the Spoken Word. On January 10, 2015, from 7-1opm, come join a spirited evening in celebration of creation, dreams, and legacy. The poetry of Watch Your Driving will be accompanied by the live musical stylings of Nathaneal Larochette (The Night Watch), Raphael Weinroth-Browne, Brad Morden and Croup Moses.

Additionally, the R.I.P. Ms. Focus cinepoem by Ottawa’s Dan Rascal Productions will be screened at the event. You can catch a special sneak peak  of the screener. With just a $5 cover and albums available for purchase, it promises to be a great night featuring many individuals in Ottawa’s diverse and talented arts community. 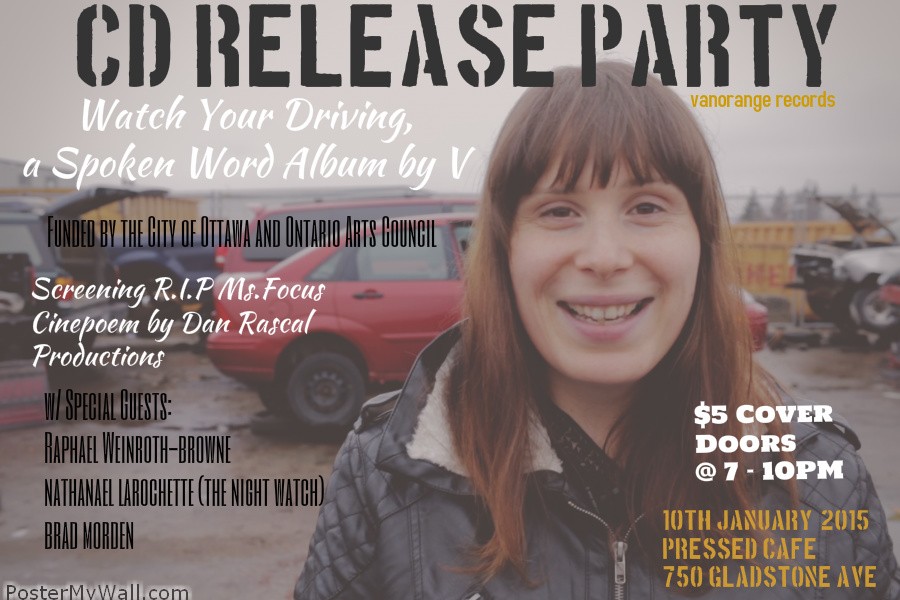