After a long summer of waiting, the Ottawa Senators finally begin their main training camp today. It is an exciting time for for young hopefuls to impress management and coaching and possibly carve out a role on the big team. For veterans, it is all about refamiliarizing themselves with the team and setting standards for the newcomers.

Here is a quick rundown of some of the bigger storylines to keep an eye on as training camp rolls on, preseason games are played, and the team nears the regular season opener on October 9th in Nashville.

For the first time in more than a decade, the Ottawa Senators must adjust to life sans first line centre, top playmaker, and brief captain Jason Spezza. His summer trade to the Dallas Stars sent a ripple through the entire organization, with everything from marketing, captaincy, roster depth, powerplay strategies and more having to be completely re-thought. The gap left by Spezza is significant, but there are players eager to step up to the challenge, whether it is Bobby Ryan taking larger control of the Sens’ offensive needs, or someone like Chris Phillips filling the captaincy void (see below).

No Captain, My Captain

As of now, the Senators organization has yet to name a replacement captain for Spezza. It is entirely possible they take a page out of the Montreal Canadiens handbook and roll with multiple alternates and no captain, or that a selection could be made as early as today. The candidates remain much as you’d expect. The veteran rearguard Chris Phillips is entering his 18th year as a Senator, and has lobbied hard for the position. Creative and charming Erik Karlsson is the team’s most talented player and could lead by example on the ice. Whether the Senators elect one of these two, choose an underdog candidate like Kyle Turris, or opt to go captainless, it will be an intriguing story to follow.

The big free agent signing of David Legwand is well-regarded by most observers. The two-way veteran centre spent his entire career with the Nashville Predators before a deadline swap to the Detroit Red Wings last season. He is signed at a very affordable price and should bring stability and dependable performance to the second line centre position. Alex Chiasson was the primary returning piece in the Spezza trade, and it will be interesting to see if he can continue his goalscoring ways after starting his NHL career at a torrid pace before slowing (partly due to illness) as the 2013-14 season progressed.

Unfortunately for the youngsters, there simply aren’t many available roster spots, so it could take more than an impressive performance to steal a spot. However, if there’s anyone who can do it, it’s top prospect Curtis Lazar. Sniper Matt Puempel will also fight hard for a spot up front, but with Mike Hoffman, Jean-Gabriel Pageau, Derek Grant, Dave Dziurzynski, Shane Prince and more battling for the same spot, it will be tough going. On the blueline, the same problem holds for Frederik Claesson, who has acquitted himself well but likely can’t squeeze through on the depth chart. 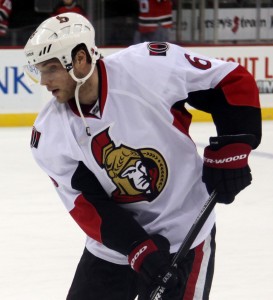 Sniping right winger Bobby Ryan and stable d-man Marc Methot are both entering the final year of their contracts. While both are currently negotiating and could sign at any minute, they could also play out their contract years without the security of long-term deals. Either outcome will be interesting to watch; Ryan has hinted that a deal in the seven-year range is on the table, and if signed it could draw a lot of goodwill. However if he remains unsigned, his desire to earn a big contract could inspire even more impressive production from the offensive star, who had a decent first season with the Senators (hampered by injury) but who likely wishes to get back to his expected 30-goal benchmark.

It’s only the first day of preseason, but clearly there are lots of interesting storylines to follow as Sens training camp gets underway. Stay tuned and Go Sens Go!