You are here: Home › Entertainment › Amazing Race Finale in Ottawa

On Sunday night, the second season of the Amazing Race Canada wrapped up in our nation’s capital with an charming underdog story. Mickey and Pete, likeable friends from Parry Sound, Ontario, raced a flawless final leg to clinch the victory, despite never winning a leg all race long. Canadian hockey gold medalists Natalie Spooner and Meaghan Mikkelson, who dominated the competition from start to (almost) finish, won seven of eleven legs before narrowly losing in the final episode.

In the finale, the racers visited Ottawa for the first time in the show’s young history. The episode was filmed in late spring. Though you can’t compete in all of the tasks tackled by the racers (running panicked through Parliament and tearing apart Hansard in the Office of the Speaker is not exactly encouraged…), you can visit all of the sites and live an Amazing Race adventure of your own – at a tamer pace. 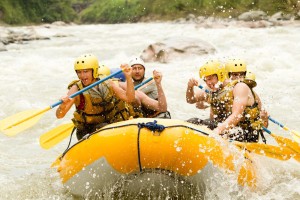 The teams’ first task was to raft a stretch of the Ottawa River between the Fleet Street Pumping Station and the start of the Rideau Canal. While you can’t replicate this exact stretch, Wilderness Tours’ “Ottawa City Adventures” program offers white-water rafting and kayaking on the Ottawa River in the city. Though it is closed for the season, in summer 2015 the program will reopen and you can raft or kayak from Britannia to Lemieux Island, with the city of Ottawa as your backdrop.

As mentioned above, you can’t get quite the “hands-on” access to Parliament Hill as the racers did, but you can absolutely visit. Free Guided tours of the premises are offered almost daily, including the Library, and the lawns are open to the public. The Centennial Flame burns ever bright in front.

The Diefenbunker is indeed a relic of the unease of the Cold War located in Carp, Ontario, and now serves as Canada’s Cold War Museum. Though it’s a far drive from the other sites featured on the Amazing Race, it is absolutely worth a visit. In addition to serving as a fascinating time capsule and featuring much information about the time period, the Diefenbunker hosts lots of fun activities. For example, on October 25th, the museum’s Halloween experience Incident at the Bunker: A Zombie Adventure takes place. Check it out!

So you can’t ascend to the top of the Queen’s Lantern in the rebuilt museum. But you can certainly marvel at the impressive glass tower, then take the time the racers couldn’t to visit the exhibits themselves. Right now, the feature exhibit is Creatures of Light: Nature’s Bioluminescence, which runs until November 9. The immersive exhibition features fireflies, bioluminescent mushrooms, glow worms, and mysterious deep ocean creatures.

You won’t be forced to put together a puzzle of all the different Amazing Race tasks, but the National Gallery of Canada is more than worth a visit. In addition to the impressive architecture of the building itself, it houses some amazing artwork. Featured exhibits at the moment include The Great War: The Persuasive Power of Photography, a feature on Group of Seven artist Tom Thomson titled The Jack Pine and The West Wind, and a newly opened exhibit, Taking It All In: The Photographic Panorama and Canadian Cities.

The race concluded with a mad dash to the finish line on the lawns of Rideau Hall, home to Canada’s Governor General. This historic mansion and its beautiful premises is open to guided tours, and its history goes back well before Mickey and Pete were greeted by Jon Montgomery and the eliminated racers at the mat. A visit to one of Canada’s most iconic and historic residences is a must for all Canadians.